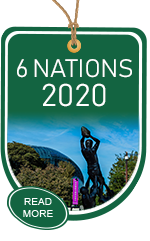 Sandymount Hotel enjoys a long & distinguished history which continues to whisper through the bricks & corniced ceilings of the eight Victorian Houses acquired over two generations  which now comprise the modernised hotel on Herbert Road.

As it stands today, Sandymount Hotel owes its roots to George Loughran from Cookstown, Co. Tyrone & his wife Rosaleen from Downpatrick, Co. Down in Northern Ireland. Together they opened the hotel in 1955 under its original name: The Mount Herbert Hotel. It was their first home and they bought it with the aid of fellow northerner, Michael O'Hare.

Three weeks after they moved in, Rosaleen gave birth to the second of five children, John, who now runs Sandymount Hotel with his son Gerard. Sandymount Hotel has very much been a family operation from the start with everyone helping out.  George who came from a large farming family and his talent for everything from carpentry to building soon had the guesthouse up and running. Raising a family in a guesthouse was not without challenges and in the busier summer months, the family slept in one bedroom to cope with the demand for bedrooms during this high season.

The couple were able to extend the guesthouse by buying the neighbouring property. They were often ahead of the trends, in the 1960s they were one of the first guesthouses to have central heating and George put in en suite bathrooms before other B&Bs were doing that. George and Rosaleen continued to expand and by the time the couple handed over the hotel to the next generation in 1988, it comprised of five period houses and 100 bedrooms.  It has now expanded to encompass eight of the two storey buildings.

A formidable team, George & Rosaleen were the first to instill an ethos of heartfelt care and service for their guests. This legacy continues right into the twenty-first century through their son John Loughran and his son Gerard.

These days Sandymount Hotel may be grander and much larger but at heart it remains the same with enduring emphasis on making sure guests are comfortable and well cared for.

John was the leading force behind the success Sandymount Hotel has achieved today, fighting through a recession, a rebrand and significant customer led additions and refurbishments.

For many years, the hotel was known as a temperance hotel because it did not have a public bar. Whilst this was in keeping with its past ethos, John applied for a bar licence and the guesthouse introduced the Line Out Bar, a welcomed addition to the property.

In 2008, the Mount Herbert Guesthouse as it was known was reclassified as a 3-star hotel

Between 2008 and 2013, the recession hit, and the hotel was losing money. This was made even more challenging as a nearby hotel was selling bedrooms below cost, which the bank supported, whilst John was still repaying loans. Most hotels in the Ballsbridge / D4 area either went bust during this time or changed ownership i.e. Four Seasons, Burlington, Bewleys, Jurys etc. However, Mount Herbert Hotel was one out of two or three hotels in the area to survive the recession under the same ownership

When the Lansdowne Road stadium reopened as the Aviva Stadium in May 2010, John decided it was the right time to coincide and rebrand the Mount Herbert Hotel as Sandymount Hotel. Yes, it was in the middle of the recession and was very costly for the hotel, however it would have been a missed opportunity with the reopening of the stadium.

The structure within the hotel has changed hugely over the last few years with a greater emphasis on Revenue Management and Marketing with a strong senior team who have a bigger input in the running of the hotel.

In 2018, under John and his son Gerard’s guidance the hotel completed a €8million refurbishment project and completion of a 17-bedroom extension, which in turn led the property to receive a fourth star awarded by Failte Ireland.

The hotel adopted a ‘greener’ approach to the business, with a dedicated in-house green team to improve the carbon footprint of the hotel. A Green Policy was introduced in 2012, resulting in the hotel winning ‘Europe’s Leading Green Hotel’ three years in a row, 2017, 2018 and 2019 at the World Travel Awards.

Sandymount Hotel has very much been a family operation from the start with all of George and Rosaleens five children having spent time working at the hotel all of whom worked in the hotel while growing up. Making beds, cleaning, serving breakfast.

Current owner John met his wife Audrey at the hotel in 1975. Audrey was interviewed by John parents and secured a role on the reception team. John and Audrey became official in 1976 after dating secretly for 6 months. They married in Monkstown Church in September 1980 and will be 40 years married this year. They have 4 children, Lorraine, Gerard, Oisin and Sinead, all of whom have worked in the hotel. Gerard is currently a Director at the hotel. Oisin spent time working in the accounts department and is now living in Toronto. Sinead spent time working in the Marketing Department and is currently studying Medicine in UL. Lorraine, the eldest of the 4, is a mother of 3 and has set up her own retail business Baal & Tanit. John and Audrey have 4 grand-children with the most recent, Olivia born last Christmas (Gerard’s first child).

As an extension of the family, continual success and longevity of the business is attributed in no small way to the people employed at the hotel. Several of the employees have worked at the hotel for decades:

Maria, John’s PA has worked at the hotel for 20 years. Maria’s son Sean also works at the hotel on match days and at reception.

Beatrice has worked at the front desk for 38 years. All three of Beatrice’s children have worked at the hotel and her husband Gerry lends a helping hand at the bar on match days.

Connor the hotel's Financial Controller has worked at Sandymount Hotel for 15 years.

Marion, Reservations Manager, is coming up to her 11th year at the hotel.

Interestingly, Sandymount Hotel is sited on the Old Haig’s Distillery in Dublin. This distillery was founded by Robert Haig, who descended from John Haig, Laird of Bemyrside, the first distiller of the famous Scotch whiskey. Set on 21 acres of land, the distillery operated from 1789 to 1860. The nearby river Dodder supplied power to the distillery through a sluice running wheel on the river.

In its early history, the distillery developed a notorious reputation due to frequent conflicts with the Revenue authorities. Many strange rumours spread relating to Excise Officers and it was widely believed that some unpopular civil servants mysteriously disappeared. While it is well-known that Haig fought the Revenue by every means possible, in the end he was forced to succumb by dissolving his business.

The bricks from the original distillery were used to construct Sandymount Hotel. From a humble beginning of 4 bedrooms in one house (No. 7 Herbert Road), 8 adjoining houses were acquired. The hotel now boasts 187 refurbished bedrooms,  private landscaped gardens, a restaurant, bar, conference suites & complimentary parking.

For many years, the hotel was known as a Temperance Hotel because it did not have a public bar. While this was in keeping with its past ethos, the current Sandymount Hotel is fully licensed and modern day visitors can enjoy a relaxing drink in the Line Out Bar which overlooks the hotel’s beautifully landscaped gardens.

In 2010 the hotel marked a new direction by officially changing its name to Sandymount Hotel. The new name celebrates the hotel’s excellent location, close to the city centre as well as Sandymount Strand which is an institution among Dubliners who enjoy taking a stroll along the beach promenade & charming nearby Sandymount Village.

We look forward to welcoming you to the new-look Sandymount Hotel where the care and values associated with the long-held Loughran tradition will always be a cornerstone for the future.